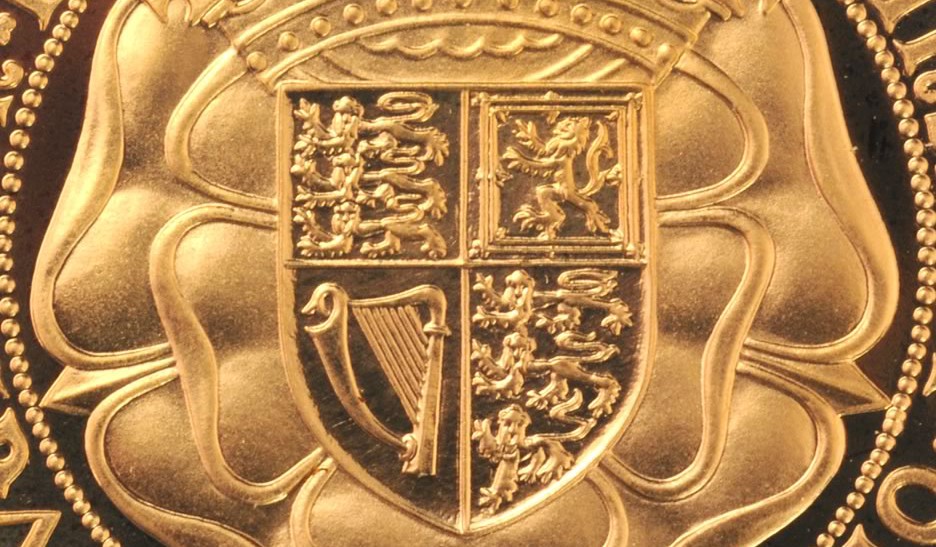 Born in 1925, Bernard Sindall designed several coins with many attractive designs, but one in particular was most significant for the Royal Mint.

In 1989 the Mint issued a special Gold Sovereign marking the 500th anniversary of the first Gold Sovereign, produced in 1489 for Henry VII. The anniversary designs were only ever used for this particular year, and equally uniquely, they were both created by one person – Bernard Sindall. For his inspiration, Sindall looked to the first sovereign design of 1489, keeping the overall look while adapting it to current demands. So on the obverse, it is Queen Elizabeth II who is seated on the throne, and holding staffs of office – the King’s Sceptre and the Rod of Equity and Mercy. On the reverse, in a departure from the traditional St George and the Dragon design of Bernadetto Pistrucci, Sindall showed the royal crown and shield, set in the centre of a double rose, which reflected the Tudor origins of the original Gold Sovereign. There is one other unique aspect of the 500th Anniversary Gold Sovereign: it’s the first imperial sovereign ever to have the actual denomination stamped on the coin.

As well as the Gold Sovereign, the Sindall designs also appeared on the Half Sovereign, Two Pound and Five Pound coins. Although the Royal Mint didn’t quite reach their sales target for the 500th Anniversary Gold Sovereign during its year of issue, the coin is now highly sought after. It was issued in dark red or maroon boxes with a Certificate of Authenticity. Those coins still accompanied by their certificate are worth considerably more to collectors.

Inspired by the Italian masters

Like many other engravers, Bernard Sindall was first and foremost a sculptor, known particularly for his slightly abstract yet notably characterful figures. Sindall studied at the Brighton College of Art, and later as a recipient of the Prix de Rome, enjoyed two years in Italy absorbing the work of the great masters. Whilst in Rome, he exhibited at the Palazzo Venezia – one of his many exhibitions around the world and at the Royal Academy. Sindall was keen to share the knowledge and influences he’d acquired in Italy, and went on to teach at the City & Guilds of London Institute, inspiring contemporary sculptors such as the late Roy Noakes.

Coins for other countries

His skill with depicting figures and animals was reflected in his designs for other coins, created for several countries around the world. Issued back in 1955, the elephants and giraffes he portrayed on the penny and halfpenny coins minted for Rhodesia and Nyasaland were well loved. He also designed a set of collector coins for the World Wildlife Fund. In a departure from birds and animals, Sindall produced designs featuring local views of Jersey, for the Channel Island’s post-decimalisation and Silver Jubilee coins. Bernard Sindall died in 1998. He may not have been the most prolific designer for the Royal Mint, but his 1989 Gold Sovereign remains possibly the most important of all recently minted Sovereigns.