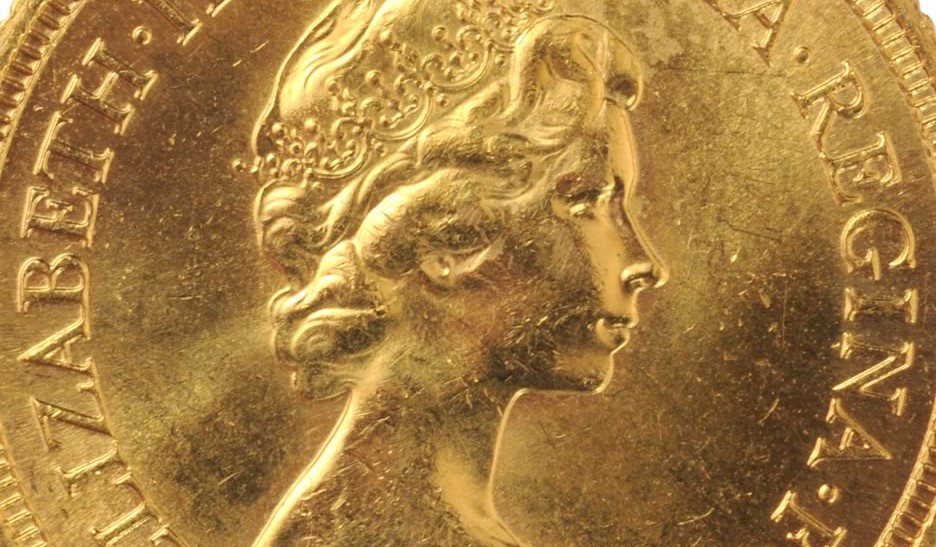 If someone asked you what was the world’s most reproduced work of art, what would you answer? An Andy Warhol print? Van Gogh’s sunflowers? In fact it’s the head of Queen Elizabeth II, reproduced on over 320 billion stamps, and designed by British artist and designer Arnold Machin.

A design for a new era

Machin’s 1966 stamp design was very similar to one adopted by the Royal Mint, two years earlier. This was intended specifically for the UK’s first decimal coins, which were introduced in 1968, although decimal currency didn’t fully replace pounds, shillings and pence until 1971. The 5p and 10p coins were the same size and value as the old shilling and two shilling coins, so they were brought in early to help the public become accustomed to them. Arnold Machin’s design was not just used on relatively low denomination coins. Apart from the years 1975 and 1977 when no Sovereigns were minted, it also graced the Royal Mint’s gold Sovereigns, from 1974 to 1984.

Like Mary Gillick, Machin wanted the Queen to look approachable and less formal, so his design replaced the traditional crown with the tiara she wore for her wedding. The portrait had a tricky gestation. Originally chosen in 1962 as one of the Royal Academy team working on the design, he was singled to progress it on his own. He worked initially from photographs taken by Anthony Buckley, then from another set taken by Lord Snowdon, and later still from personal sittings with the Queen.

In the end, the designs based on Snowdon’s photographs were judged to be the most satisfactory, and were approved by the Queen in 1964. They had also, less formally, been approved by Royal Mint Advisory Committee member John Betjeman, who thought the portrait made the Queen look “a bit sexy.” Perhaps this is what attracted the Stamp Advisory Committee, when they were choosing an artist for their postage stamp. By the mid-1960s, Arnold Machin was a well-established and respected artist, sculptor and designer. Both his father and elder brother made small models for the potteries in their home town of Stoke-on-Trent, so it was no great surprise when Arnold started work at the Minton China Factory as an apprentice china painter.

Later, during the Depression years, he learnt to sculpt at Stoke-on-Trent Art School, then studied at the Derby School of Art and subsequently won a scholarship to the Royal College of Art. The terracotta sculpture ‘Mother and Child’ he produced there would prove pivotal.

It not only won him a place in the Royal Academy’s Summer Exhibition, but also earned him a job with Josiah Wedgwood & Sons, where he produced designs for several figures, animals and even a chess set. Wedgwood’s was a loyal employer, keeping Arnold’s job for him even when he was imprisoned during the Second World War as a conscientious objector. This was typical of his quietly expressed but strongly held beliefs; in the 1950s, he made the local headlines when he chained himself to a cast iron gas lamp, due to be replaced by a concrete electric version, in a protest against modernism. Arnold Machin became Master of Sculpture at the Royal Academy School and was awarded the OBE. But he will almost certainly be best known as the designer whose work, first seen on a coin and then on a stamp, has become the most reproduced work of art in the world.