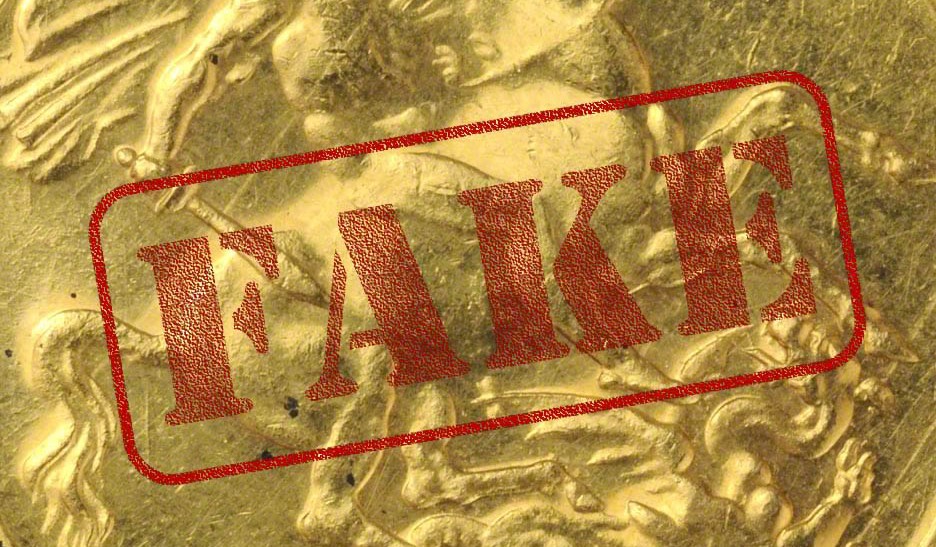 When purchasing gold sovereigns, the rule ‘buyer beware’ should always be in the forefront of ones mind. This article takes a look at some examples of fake gold sovereigns.

Due to the nature of gold, sovereigns are very difficult, though not impossible to counterfeit convincingly. At 19.3g / cm3, gold has one of the highest densities of all metals, beaten only by the likes of tungsten, platinum and plutonium. So creating  convincing fake gold sovereigns using a cheaper metal is pretty darn difficult, they’re either going to have to be under weight, or too big. If the dimensions of the fake are accurate (diameter and thickness), it will be too light and if the weight of the fake matches a genuine coin, it would either have to be thicker and / or wider to accommodate the additional material. In most cases, nothing more than a keen eye is needed to spot a fake sovereign. However, there have always been additional aids to help prevent the inadvertent mistake.

Walk-in to any shop in the 18th or 19th century and you would have most likely seen a sovereign balance sitting on the shop keeper’s counter.

The photograph above shows a typical balance of the period. On the box is the label stating:

To weigh and guage sovereigns and half sovereigns, being so exact that no counterfeit can possibly go through the guage, of sufficient weight to turn the balance.

The sovereign balance worked on the simple rule that a counterfeit sovereign could not meet all 3 of the following criteria:

The balance has two platters, one for full and one for half sovereigns. The slot in the centre of each platter is to check the thickness of a coin. If the coin didn’t pass through the slot, it was too thick and therefore not genuine. Placing the coin onto the balance would verify the diameter of the coin. Too wide & it wouldn’t sit inside the platter. Finally, if the balance failed to settle horizontal, the weight of the coin was incorrect and therefore rejected.

Today, we have the benefit on hand-held and desktop XRF scanners. XRF stands for X-Ray Fluorescence and the devices operate by firing a beam of x-ray radiation at the item to be analysed. The x-rays are energetic enough to cause the item to throw off electrons which the scanner is able to analyse and thus determine its composition. XRF scanners are however not cheap. With a price tag of 5-figures, a small dealer is unlikely to have such a device and must therefore rely on his or her skill and experience in spotting a dud.

The good, the bad & the ugly

We often see fake sovereigns and when able, we’ll acquire them for our own reference. Here are some examples of good and not so good counterfeits.

Whilst most fakes are made of lower grade gold, counterfeits in 22ct gold do exist. Being the same size & same weight as a genuine sovereign, what’s the point in going to the effort of creating a fake? Of course, it’s all down to their rarity & their numismatic value, rather than the bullion value. Some of the best and most convincing fakes are believed to have originated from Lebanon, sometime in the 1970’s, courtesy of one Said Chaloub. He was either influenced or financed by an American called Harry Stock, another counterfeiter, who was caught by the Swiss in 1977. Lebanese fakes all tend to be of rare years, such as the 1917 example below. Had this been genuine, it would have been worth in-excess of £14,000!

The detail on this coin is excellent. Indeed, many dealers have been caught out in the past because they do look quite convincing. However, look a little more carefully and the alarm bells should start ringing… Below is a close-up image of the fake vs a genuine sovereign. You’ll see that apart from the usual knocks & scuffs, the counterfeit has an uneven ‘pimply’ surface. Edges are not as defined as they should be and there’s a significant amount of detail missing, particularly on the horse’s tail.

Whilst the Lebanese fakes are are of quite good quality, many Italian counterfeits are downright rubbish. Even though it’s fairly easy to spot a fake in the flesh, or from close-up images, it’s another matter when you’re relying on small, poor quality photos. Unfortunately, many unwitting buyers get duped when buying from sites like eBay.

We’ve seen a ‘good’ example of a fake, now let’s take a look at bad one…

A very easy fake to spot. The fist thing you notice is the die axis is off. Holding the coin using thumb and forefinger and rotating it on a vertical axis shows that the obverse and reverse faces are not in-line with each other. When you flip a sovereign over, don’t necessarily be put-off if one side appears upside-down. Sovereigns minted up to 1887 had a reverse die access. The next giveaway is this is supposedly an 1897 London mint sovereign. The problem being, in 1897, sovereigns were only minted in Melbourne & Sydney! Closer inspection reveals incorrect placement of the date and obvious imperfections around the outside edge.

Finally, the downright ugly! At first glance, you might think the example below is just a heavily worn coin, hence the lack of detail. However, a worn coin would typically show signs of wear on the high points on the faces, thus having much flatter surfaces.

Genuine sovereigns are created by striking a blank with a die to create the impression of the coin. Many fakes are cast using a mould, which results in a very crude copy. Cast coins often have a slippery or soapy feel when handled. The border is too wide, it lacks detail and is also uneven. At 7.62g, it’s significantly under-weight, it’s way too thick 1.89mm and it’s also too wide at 22.33mm in diameter. As for the gold content, an XRF test reveals a purity of just 59.9%, which means the scrap value of this coin is just £ ($ / €). Compare that to the bullion rate for a sovereign, which is currently £ ($ / €) and you see the potential profits involved.