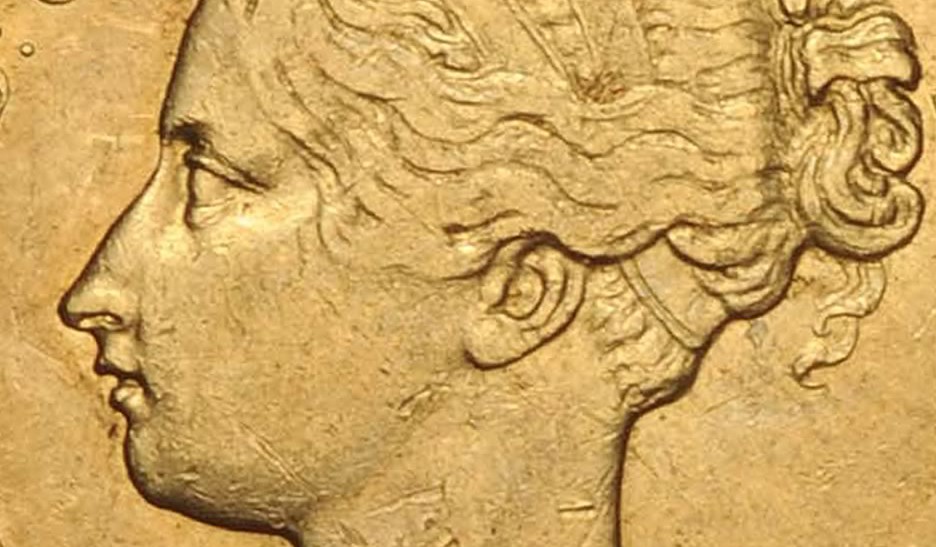 James Wyon (1804 – 1868) was William Wyon’s cousin. He worked as William’s assistant until becoming Resident Engraver at the Royal Mint following William’s death in 1851. At first James was appointed on probation, but his position was made permanent in 1854 and continued, officially, until 1861.

James’s work was seen not only in Britain, but also in Australia. He prepared the dies for an image of the young Queen Victoria, for the Australian Sovereign and Half Sovereign of 1855 and 1856, minted in Sydney. The image was James’s own design, and different to the more famous ‘young Victoria’ portrait by William Wyon. It’s believed this image was not used on any other coin. James’s initials also appear on the obverse of an 1859 pattern penny, also showing an image of Queen Victoria. While James must have worked on several medals during his time at the Mint, there seem to be few recorded details of them.

Although James is recorded as having held the post of resident engraver at the Royal Mint until 1861, he was actually pensioned off due to ill health, having apparently been admitted to a mental hospital a year before. However, he seems to have recovered to some extent, as following his tenure at the Royal Mint, James Wyon turned to painting and produced a series of images in the Victorian sentimental style, with titles such as ‘Amusing Baby’, ‘A family visit’ and ‘Going with father’s dinner’. Whilst perhaps not the greatest ever works of art, they were well-observed paintings and certainly suited the mood of the age. One hopes they earned James enough to make his final years more comfortable.

From a long line of engravers

James Wyon was a member of the artistically gifted Wyon family, which originated in Germany. They supplied coin and medal dies to the mints based in Cologne. Sometime in the 1760s, Peter George Wyon, a metalworker, emigrated to England. His son became a metalworker too, started a die-engraving business in Birmingham. And so the tradition continued through the family. Thomas Wyon was the first to make his mark in London, as Chief Engraver of His Majesty’s Seals in 1816. James Wyon, however, is descended from the side of the family that stayed in Birmingham. He was the son of George Wyon and Elizabeth Phillips. In keeping with the Wyon family tradition, two of James’s sons, Henry and George, also became die engravers; in fact George took over from James as resident engraver at the Royal Mint, though he sadly died young in 1862. James’s brother John George, meanwhile, had remained in Birmingham and was the father of Edward Wyon, who worked for a local mint and was subsequently responsible for building the first modern mint in China. James Wyon is perhaps not the most famous member of the Wyon dynasty, but with so many gifted engravers and artists in the family, he can surely be forgiven for that.