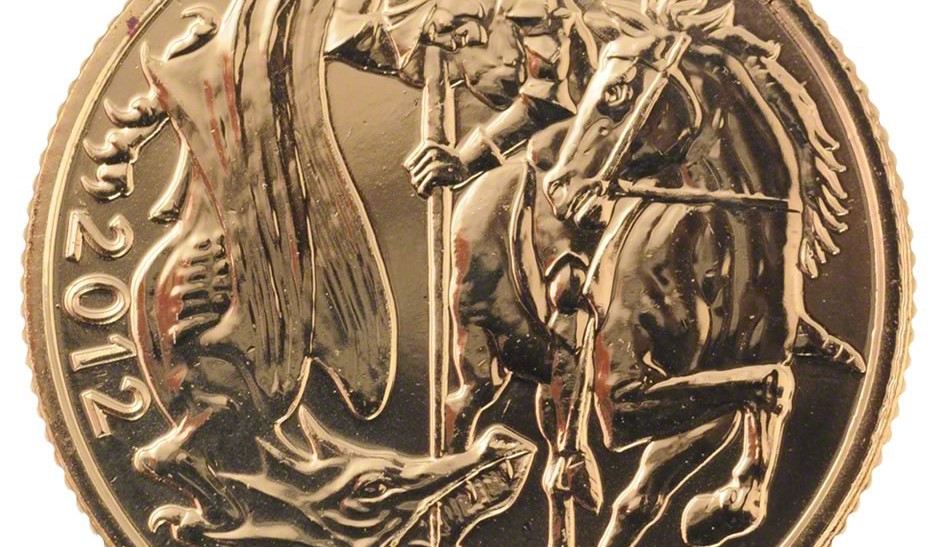 For the 2012 Queen’s Diamond Jubilee Gold Sovereign, the Royal Mint looked once again to break with the classic Pistrucci St. George and the Dragon design, and seek a new interpretation. This is only the fourth time that the iconic image has been redesigned, and the artist chosen for this rare honour was sculptor Paul Day.

Born in 1967, Paul Day has become known for sculptures that are lifelike yet often incorporate an unusual sense of perspective. British-born, he studied initially at the Colchester Institute before attending the Dartington College of Arts and subsequently gaining his Degree at the Cheltenham School of Arts.

Day was fortunate to start working almost immediately on leaving Cheltenham, supported by a grant from the Prince of Wales Trust. Since then his work has won several major prizes, and been awarded some significant commissions.

One of Day’s best-known works in the UK is the Battle of Britain Memorial on London’s Embankment. His design won the 2002 competition to select the artist for this important commission, which was finally completed and unveiled in 2005.

The Battle of Britain Memorial is an extraordinary work, where the low relief becomes three dimensional in places. As a result, the sculpture is notably dynamic and arresting – perhaps influencing the judges’ final choice of Paul Day for the Diamond Jubilee Sovereign?

Similarly acclaimed was Paul Day’s work on the friezes for the Memorial to the Queen Mother, situated on the Mall. The first frieze also has a wartime narrative, showing the then Queen Elizabeth and her husband King George VI meeting and raising morale amongst Londoners who were enduring the Blitz during the Second World War.

Day’s characteristic relief work, and his skill at capturing emotion, is also seen in The Meeting Place, a huge sculpture of an embracing couple standing on a bas-relief plinth, and sited on the concourse of the London Eurostar terminal at St Pancras. The couple are, allegedly, modelled on Day himself and his French wife; the artist has lived in France for several years.

A fresh look at St. George

With such an impressive portfolio, it was entirely appropriate that Day should be chosen as one of five artists invited to submit designs for the Diamond Jubilee Sovereign. His rendition was typically animated and absorbing. As the artist himself explained, “I have chosen to opt for a romantic version of the St George and the Dragon theme — a medieval knight of Arthurian legend, something quite traditional and true to our culture.”

“I have given the dragon a more threatening attitude and size,” Day continued, “so that it represents a real menace: its wings have a harp-like quality, in contrast to the realism of the knight and horse, while the lance divides the surface into two.”

This modern interpretation of St George and the Dragon has divided opinion, with traditionalists rather less receptive. Other commentators have welcomed the design but expressed disappointment that it was not accompanied by a new portrait of Her Majesty for the obverse; the Mint chose to retain Ian Rank-Broadley’s design.

One aspect that all experts have agreed on, however, is that as it was commissioned for one year only, the 2012 Diamond Jubilee Gold Sovereign will rapidly gain in value.