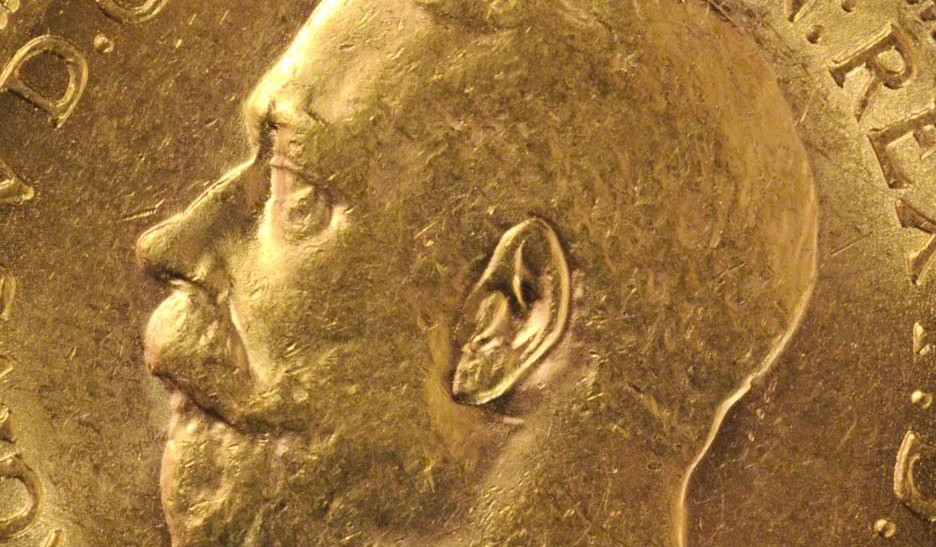 Born in Melbourne, Australia in 1863, Edgar Bertram Mackennal never really liked his first name and preferred to be known as Bertram (although there’s no record his wife Agnes ever called him Bert). Mackennal’s relevance to Gold Sovereigns is his design of the head of King George V, used on all UK coins from 1911. Although George V acceded to the throne in 1910, the sovereigns produced that year still featured the head of his father Edward VII, making 1911 the first year of the King George V sovereign, which was minted in London, Mackennal’s home city of Melbourne, and in Perth, Sydney and Canada.

The route to Edgar Bertram Mackennal being chosen to design the King George V coins is an interesting one. Mackennal was a well-travelled man, in an age where the voyage from Australia to Europe required a commitment of several weeks. He first left Australia for England at the age of 19, having studied at the Melbourne School of Design and wanting to broaden his knowledge and experience, at London’s National Gallery and Royal Academy of Arts schools.

Finding his worthy studies rather dull, Mackennal then enjoyed a sojourn in the lively, cosmopolitan atmosphere of Paris. A commission to sculpt the likeness of a British Army officer saw him return to England, where he married Agnes. An extended honeymoon took them to Italy and Paris; it also exhausted their savings and urgently needing some income, Mackennal was forced to exchange the exhilarating continent for the rather contrasting environment of the Coalport Potteries in Shropshire, where he was Head of Modelling and Design.

Whilst there, Mackennal entered and won a competition to design the sculpted reliefs on the façade of the Australian Parliament building in Melbourne. This necessitated a voyage back to Australia to produce them and was followed by further commissions. So it was another four years before he could return to Europe; the actress Sarah Bernhardt urged him to go back to Paris, then regarded as the crucible for all the most exciting and original artistic inspiration.

It certainly seemed to work for Mackennal. He created his figure of Circe, which was exhibited first in Paris and then at the Royal Academy in London. Here it attracted even more attention, the result of Victorian prudery. It was not so much the shapely, naked figure of Circe herself, but the rather more explicit depictions around the pedestal that apparently required being concealed by blankets. This extra publicity did Mackennal no harm at all, leading to several more commissions and yet another voyage back to Australia, in 1901, to execute them.

By the time Mackennal was once again in London, Queen Victoria had died and the Edwardian age had begun, with the brief reign of Edward VII. Mackennal was awarded several significant commissions, including the medals for the 1908 London Olympics. Still in his forties, he became an associate of the Royal Academy, and later a fellow. On the death of Edward VII, Mackennal designed the tomb of the late King for St. George’s Chapel in Windsor, and subsequently the obverse of the King George V coins, including the Gold Sovereign.

Edgar Bertram Mackennal was made a Knight Commander of the Victorian Order in 1921, becoming Sir Bertram Mackennal and securing his place in history as the first Australian artist to be knighted. He continued sculpting throughout the 1920s, although by this stage some of his work was considered rather conservative. But by then surely Bertram had earned the right to settle down a little, after years of heady bohemianism in Paris, and thousands of miles travelled between Europe and the land of his birth. He died, suddenly, at his home in Devon in 1931.