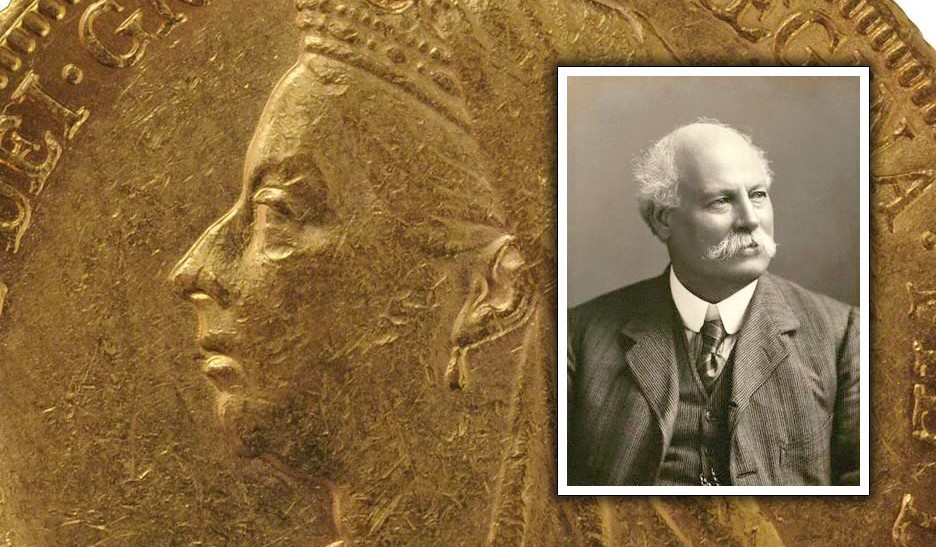 Millions of people around the world have seen the work of Sir Thomas Brock and probably not been aware of it. He designed the huge Imperial Memorial to Queen Victoria, which has stood in front of Buckingham Palace since 1911, featured in countless tourist photographs, holiday brochures and news clips.

This Worcester-born sculptor was responsible for many notable memorials, statues and sculptures, often on an epic scale. Like the Imperial Memorial, his statue of Edward the Black Prince in Leeds, the Titanic Memorial in Belfast and the Queen Victoria statue in Birmingham are all significantly larger than life and redolent of the confidence of the Victorian and early Edwardian age.

Brock’s importance for numismatists is his ‘veiled head’ of Queen Victoria, introduced in 1893. His design was chosen from a competition organised by the Royal Mint in 1891, for a new image to replace the widely disliked Golden Jubilee image created by Sir Edgar Boehm. Six other artists competed, but it was Brock’s design which most appealed to the judging committee. It may have helped that Brock’s Diploma work at the Royal Academy in 1891 was a bust of his close friend Lord Leighton, who was also a leading member of the Mint’s committee.

Nevertheless, Brock’s design almost certainly won on merit. After the faintly comic appearance of Boehm’s Victoria wearing what looked like a tiny hat, Brock’s “dignified and distinctive” design must have come as a huge relief; it was far better suited to a Queen perpetually in mourning for her beloved Prince Albert. Brock’s image shows her wearing her widow’s veil, which partially obscures a modest tiara, and also the Star of the Garter. Close examination of the coins bearing his design shows Thomas Brock’s initials engraved very small at the base of the Queen’s neck. The Gold Sovereign, and the silver coins, were minted from 1893, with the design introduced for lower value coins two years later.

Brock’s Victoria also appeared on a number of commemorative medals, including the Royal Victorian Medal of 1896 and the Diamond Jubilee Commemorative Medal released the following year. The image was the last of Victoria to be used on UK coins until her death in 1901.

Thomas Brock attended the Worcester School of Design before being apprenticed as a modeller at the famous Worcester Royal Porcelain works. He became a pupil of the sculptor John Foley in 1886; when Foley died in 1874 Brock took over many of his commissions, the best known being the statue of Prince Albert, for the Albert Memorial in Kensington Gardens.

Last tribute to a friend

By then Brock had entered the Royal Academy School, becoming an Associate of the Royal Academy in 1883 and a Royal Academician in 1891, allowing him to add the letters RA after his name. It was during this period that he became friends with Lord Leighton, who occasionally used Brock’s studio near Regents Park. So it was no great surprise that Brock’s Royal Academy Diploma work was a bust of his friend, or that Brock was chosen to sculpt the monument to Leighton following his death in 1896, finally erected in St Paul’s Cathedral in 1903.

The latter part of Brock’s career from 1901 was dominated by his work on the vast, 82 foot high Victoria Memorial, at the head of The Mall in front of Buckingham Palace. Hugely complex and demanding, it apparently so impressed the current monarch King George V at its unveiling, that he knighted Thomas Brock on the spot. Sir Thomas Brock died in London in August 1922.