Both the obverse and reverse faces of the coin are by Bernard Sidnall . 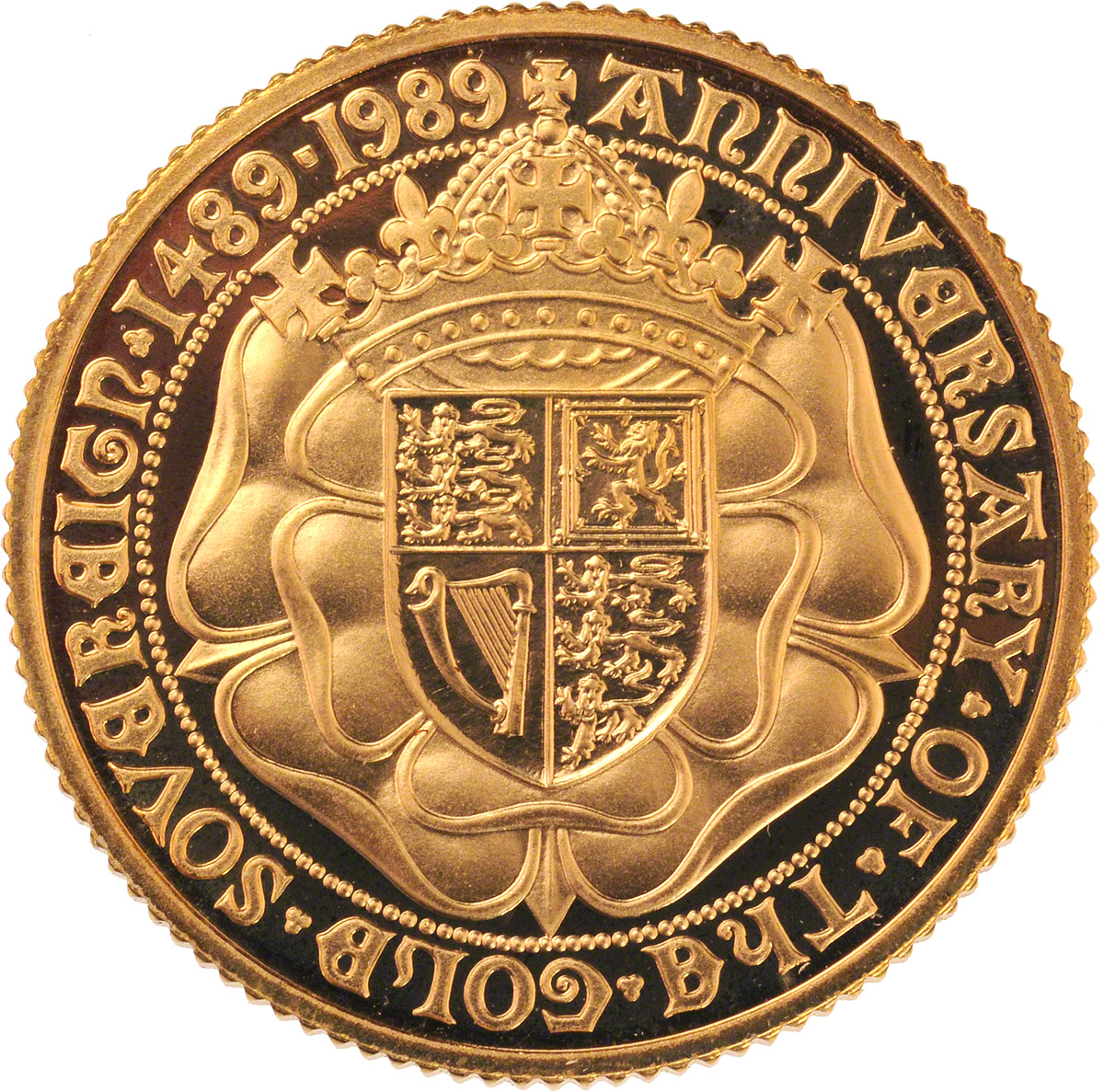 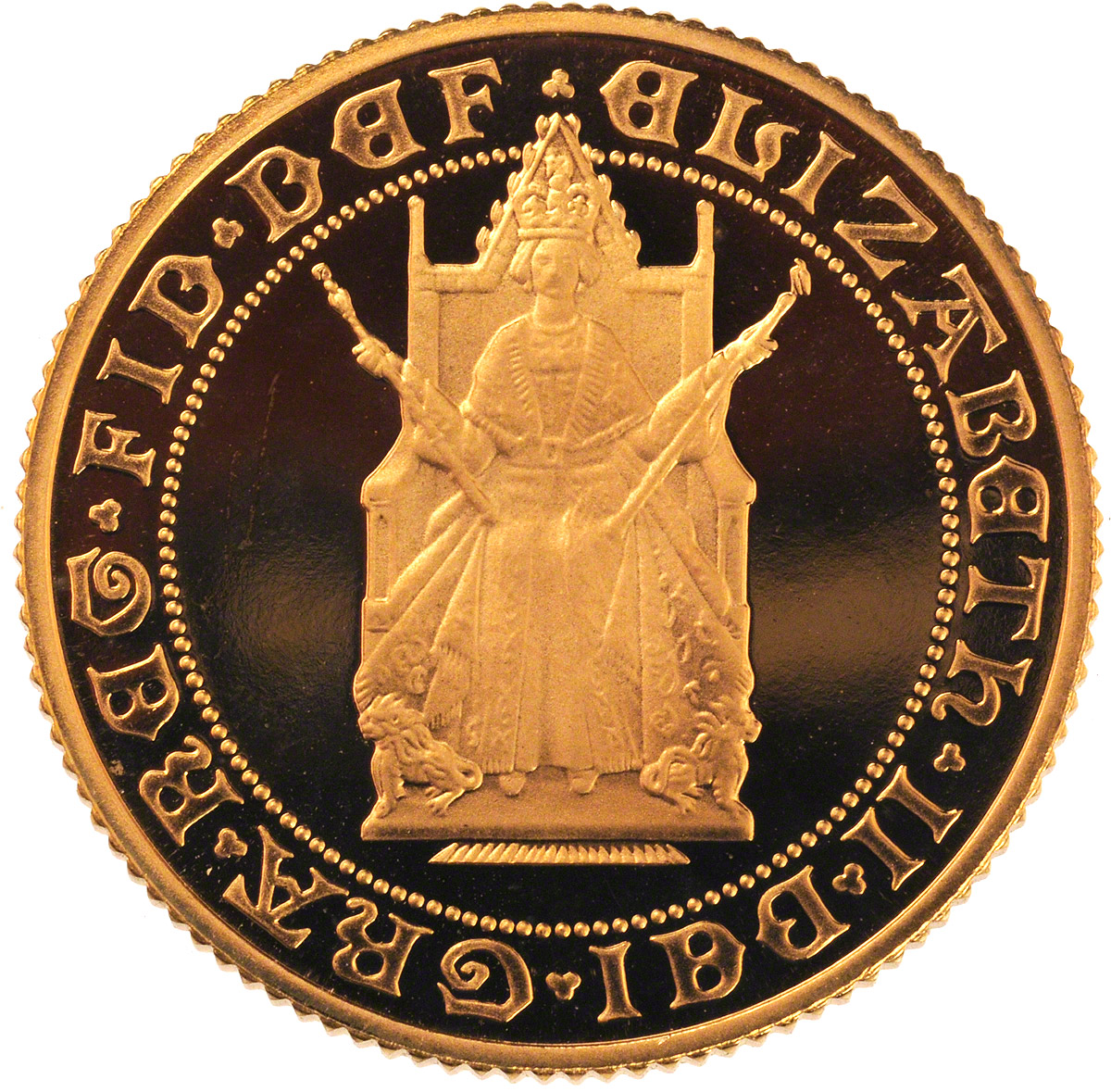 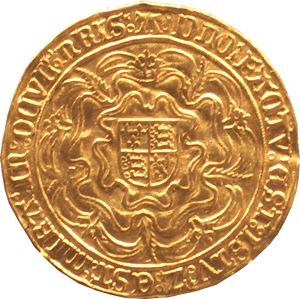 To commemorate the 500th anniversary of the first gold sovereign, the Royal Mint introduced a special one-off design that echoed the original design.

The first 'sovereign' was introduced in 1489 during the reign of Henry VII. A truly majestic coin in every way. The obverse face showed the king enthroned in majesty, the reverse showed the royal arms set inside a Tudor rose. The original sovereign was a very different coin to the sovereigns we are used to today. Weighing 240 grains, or half a troy ounce (15.55g), they were almost twice the weight of the modern version. The original 'sovereign' was also struck in a higher purity of gold. Whereas modern sovereigns are 22ct gold (91.67% pure), those original coins were 23ct gold(95.83% pure).

Although the Certificate of Authenticity refers to 12,500 individual sovereigns being struck, due to the lack of demand, only 10,535 were actually issued that year. Now a highly collectable coin, the 1989 sovereign sells for a premium price.

The coin is encapsulated in its own plastic capsule and held in a presentation case. The Certificate of Authenticity reads as follows:

In 1989 the Royal Mint is issuing a maximum of 27,500 sovereigns for worldwide distribution. Of these coins, a number are being reserved for issue in three-coin and four-coin gold Proof Collections.

The 1989 gold Proof sovereign features a new obverse and reverse design to commemorate the 500th anniversary of the first gold sovereign.

The pound coin was introduced in 1489 by special commission of Henry VII. Struck in gold and featuring a design of the King enthroned in majesty, the new coin was to be known as the sovereign.

The sovereign continued to be struck until shortly after the accession of James I in 1603, when it was replaced by other gold coins, and eventually in 1663 by the guinea.

When it was re-introduced in 1817 by George III, the sovereign was given a new reverse design by the Italian engraver, Benedetto Pistrucci. The design depicts the slaying of the dragon by St. George. This popular design has become intimately linked with the sovereign, and has in fact appeared on all gold sovereigns struck from 1887 until 1988.

The 1989 gold Proof sovereign features two new designs by Bernard Sindall, both of which are modern adaptations of the original sovereign design of 1489. The reverse is a Shield of the Royal Arms ensigned by an open Royal Crown, the whole superimposed upon a double rose and the circumscription ANNIVERSARY OF THE GOLD SOVEREIGN 1489-1989. The obverse shows H M Queen Elizabeth II seated as at her coronation, within the circumscription ELIZABETH II DEI GRA REG FID DEF, which may be translated as Elizabeth II - by the grace of God, Queen, defender of the faith.

The sovereign weighs 7.98 grammes, measures 22.05mm in diameter and is struck in 22 carat gold.

Only 12,500 individual gold Proof sovereigns have been struck for worldwide distribution.

It is advisable to avoid handling your 1989 gold Proof sovereign as fingerprints or marks will impair its delicate surface.