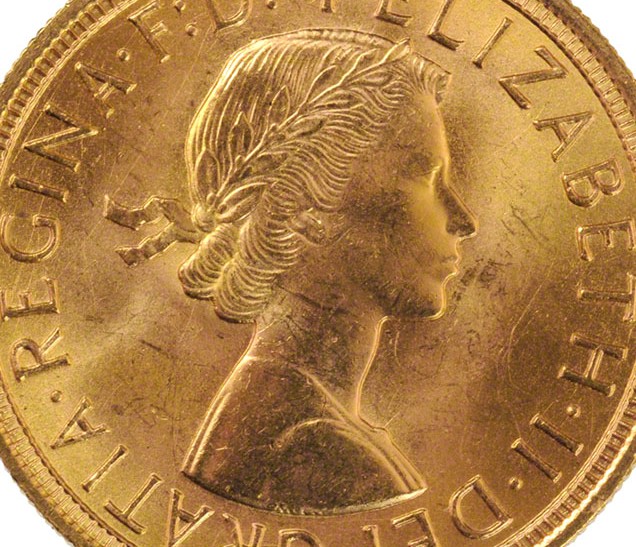 To a certain generation, Mary Gillick’s designs are amongst the most recognisable on British coins. Her classic profile portrait of Queen Elizabeth has graced a range of coins, including the Gold Sovereign, from the Coronation in 1953 until 1970. Young, informal and fresh, Mary Gillick’s design captured the spirit of the age. Post-war optimism had taken root; the 1951 Festival of Britain showed a glimpse of an exciting future, and even food rationing was due to end soon, as the British economy gained in strength.

By substituting a simple wreath of ribbons for the more traditional crown, Mary Gillick gave us the image of a friendlier, more approachable monarch. The design was forward-looking and energetic, which is even more remarkable as Gillick herself was 71 when she submitted the design in 1952. Born Mary Tutin in Nottingham in 1881, Mary Gillick studied at the Nottingham School of Art and subsequently the Royal College of Art. She was primarily a sculptor, and her first exhibition at the Royal Academy in 1911 comprised mostly large bronze and stone sculptures, although it also including designs for medals to be given as awards.

By then Mary had married, having met fellow sculptor Ernest Gillick in her Nottingham home town. It’s commonly believed that Ernest’s work was a major influence on Mary; while it’s true they worked together much of the time, this should not detract from her own creativity and imagination. She was responsible for several highly regarded sculptures during her career, both for the church and private patrons. Commemorative medals featured significantly in Mary’s work. She produced several for the Royal Society, Royal Academy and Institute of Physics, as well as portrait plaques for contemporary worthies including Sir Henry Welcome.

A design at risk

Her famous Queen Elizabeth II design was chosen in preference to sixteen others, submitted by various artists. However, the design itself nearly didn’t make it to the coins for which it was intended. The die master was judged to lack relief, meaning that the detail Mary had created would not appear when the coins were minted. Fortunately, the die was remastered and saved by Cecil Thomas – rather ironically, since he was one of the sixteen whose designs had been passed over in favour of Mary’s.

Familiar in many countries

The Gillick Elizabeth was used not just for the Gold Sovereign, but also for coins of many denominations in the UK and the then Commonwealth countries of Canada, Australia, Union of South Africa, New Zealand, Ceylon (now Sri Lanka) and Southern Rhodesia (now Zimbabwe). The design lasted in mainstream use in the UK until the introduction of decimal currency in 1971. It still appears on the Maundy money given out by the Queen on Maundy Thursday, the day before Good Friday, and on other special issues. A version adapted by David Gentleman in 1966 was introduced, and sometime still appears, on special commemorative stamps issued by the Royal Mail.

Mary Gillick was awarded the OBE, and died in London in 1965. Her skills have been inherited by later generations of her family, with Theodore, Liam and James Gillick all contemporary artists.