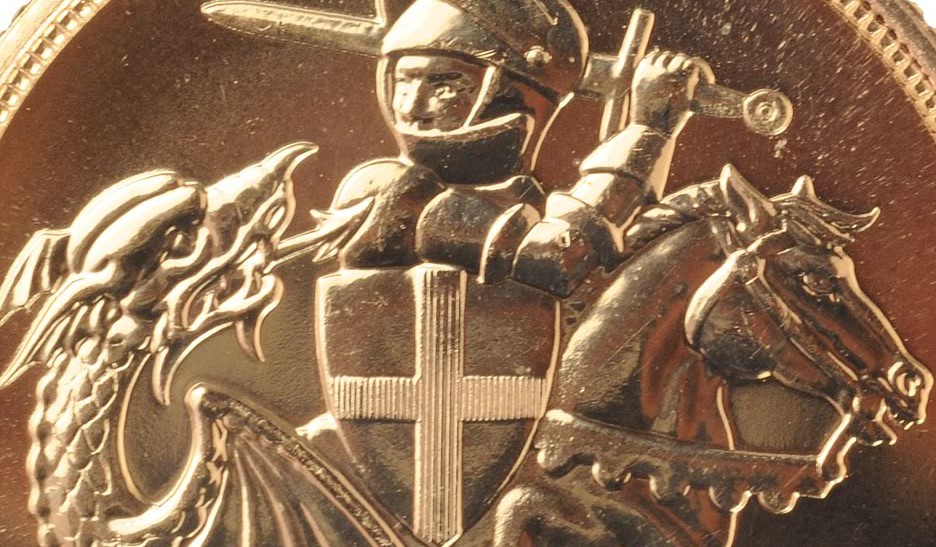 While many of the Royal Mint’s coin designers have been sculptors, Timothy Noad has made his name in another art discipline: calligraphy. Producing heraldic commissions as a Herald Painter at the College of Arms and working in a different medium, he’s brought a fresh approach to the Mint’s coin design. This is reflected in his designs for the Gold Sovereign issued for the Queen’s Silver Jubilee, and for the more recent £1 coins. Timothy Noad studied at the Reigate School of Art and Design, at Birkbeck College (University of London) and the Courtauld Institute of Art. He has worked for the Royal Household and several major London institutions such as the City Livery companies – and, of course, the Royal Mint.

For the 2005 Gold Sovereign, Timothy Noad gave the classic image of St. George and the Dragon a much more contemporary look. Strikingly different from Bernadetto Pistrucci’s well-known and much-used representation, Noad’s St George appears more animated and dynamic, ready to swipe the dragon with a mighty backhanded stroke! These designs also appeared on the Half Sovereign, Double Sovereign and Five Pound coins, which the obverse showing Ian Rank-Broadley’s portrait of the Queen.

In 2004 Noad had produced a set of designs for the Royal Mint depicting national symbols: a crowned lion for England, a unicorn for Scotland, a dragon for Wales and a hart (stag) for Northern Ireland. Probably intended for use on the next issue of £1 coins, they were passed over in favour of a series of images of British bridges, designed by Edwin Ellis. Nevertheless, the Mint thought sufficiently well of them to produce them as pattern pieces for sale to collectors.

Clearly the concept of using national symbols stayed with Timothy Noad when he was commissioned to mark the 30th anniversary of the introduction of £1 coins in the UK (which replaced the previous £1 note). This time his images were based on the floral emblems of England, Wales, Ireland and Scotland, and were introduced over a period of two years starting in 2013. Among his more recent works, Timothy Noad created an elaborate piece of calligraphy for the Queen’s Consent document, in 2011. This was required to show that the Queen gave consent for the wedding of Prince William and Kate Middleton. Timothy Noad is also a Scribe to the Crown Office at the House of Lords, a Fellow of the Society of Scribes and a Fellow of the Calligraphy and Lettering Arts Society. He’s published a number of books on calligraphy and regularly gives lectures and hosts workshops. External link: Timothy Noad’s web site.